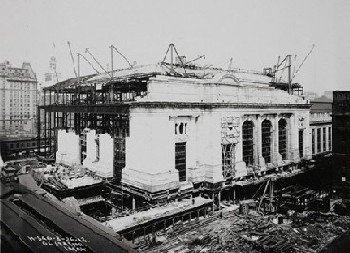 Without a doubt, Grand Central Station is one of New York City’s most recognizable and historic landmarks. From postcards to Hollywood movies, there are few people who have never seen one of the many instantly recognizable shots of the the station’s grand hall. Though today it is a famous destination, the station had humble beginnings.

The New York and Harlem Railroad Station was built starting in 1836. As rail road traffic increased, there was an increased need for passenger stations. And as steam locomotives were banned from crowded areas, the need arose for a new terminal in the late 1850s. The first Grand Central, then known as Grand Central Depot, was built by shipping Tycoon Cornelius Vanderbilt as a new train depot and rail yard. It was reintroduced as Grand Central Station with its most famous feature, the aforementioned train shed, around 1900.

As the railroad began to electrify its rails, the terminal went under major construction and was officially reborn when it opened to New York City’s residents and visitors in 1913. In the 40s, around 40% of the U.S. population traveled the rails via the popular terminal. In the 1990s, Grand Central underwent a $425 million renovation. Today, the historic destination welcomes tourists and travelers alike, and houses restaurants, cocktail lounges, and specialty shops along with its trains.